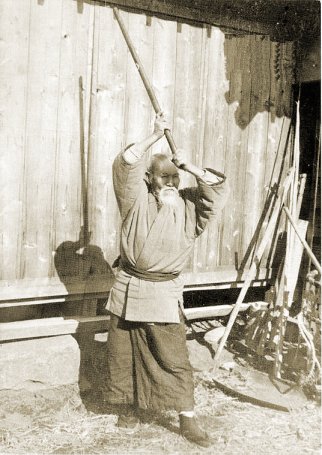 Here is a video of Saito Sensei demonstrating and explaining the 7 ken suburi. This video was filmed in Italy in the private dojo of Dr. Paolo Corallini Sensei in 1988.  Please also find below some details to listen out for when watching and studying the suburi on your own.

* Ni-no-suburi – “The hips are engaged fully in the hanmi position…in such a way so as to avoid an ai-uchi or mutual kill situation with the sword. This is a characteristic of Aikido.”

* San-no-suburi – “The founder explained that we should preform this movement with the feeling of assimilating ourselves into the universe by inhaling universal Ki through the tip of the sword passing through the nose and arriving at the seika-tanden.”

* Yon-no-suburi – “Whether we are in the right or left hanmi we practice using the sword so that it and the body function as a single unit.”
* Go-no-suburi – “The fifth suburi is the movement most often used in the kumi-tachi [paired sword exercises]…. We move our bodies fully to the left and right in the kumi-tachi. In the suburi we practice adjusting our positions to the right or left hanmi as appropriate.”
* Roku-no-suburi – “[Roku-no-suburi] is one of the movements included in the ki-musubi-no-tachi exercise…. Immediately when our opponent attempts to attack [shomen-uchi] we execute a thrust.”
* Shichi-no-suburi – “In this movement our strike is parried downward and we free the sword circularly and then counter with a thrust. This is used in the 2nd and 4th kumi-tachi.”