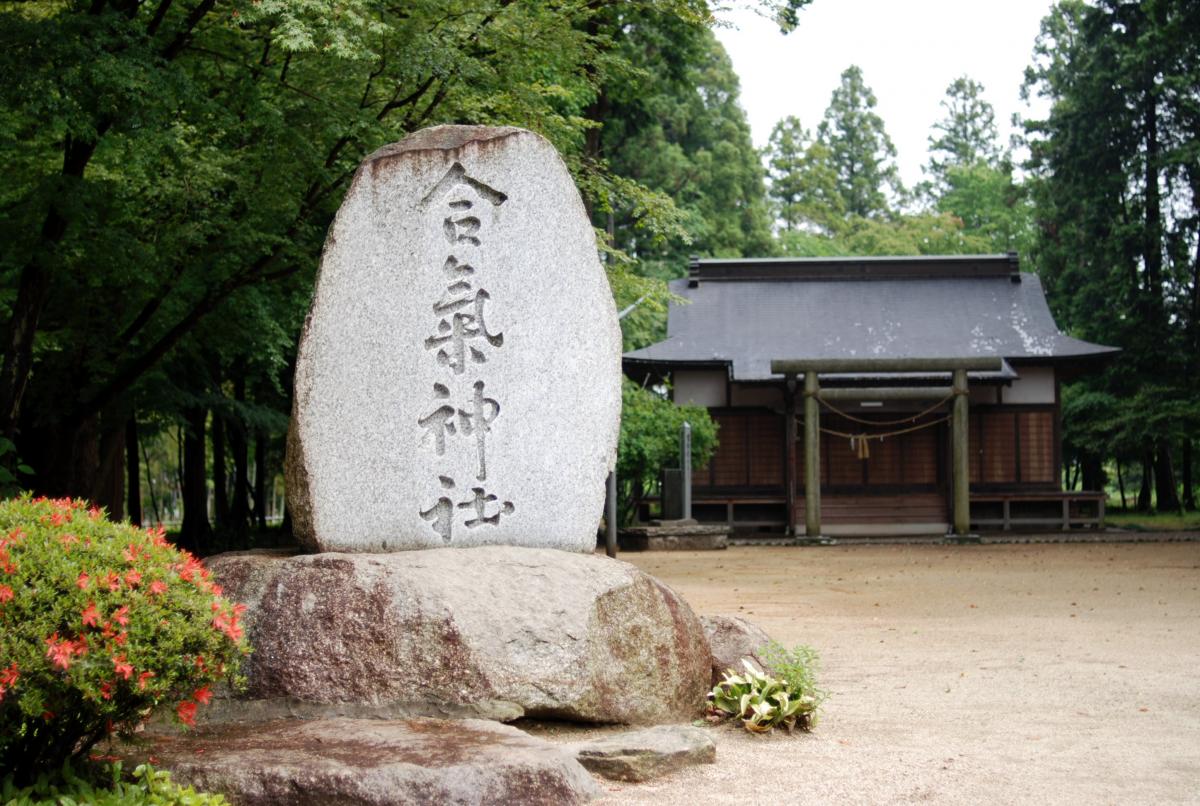 Aikido is a Japanese martial art, or Budo, created by Morihei Ueshiba (1883-1969). It literally means “the way (-do) of harmony (Ai-) through universal energy (-ki-)”. Following the philosophy of its founder, Aikido is not a way to hurt or injure others, but rather to unite all people into one universal family. Ideally, in a situation of conflict, the Aikido practitioner applies only the appropriate level of control to neutralize the aggression or violence of the attacker and to save his/her own life.

Aikido techniques consist of blending with ones partner, entering and turning movements, joint locks and throws, all which integrate with a comprehensive weapons system. Beyond these technical aspects, Aikido stimulates the practitioner to pay attention to potential fighting or violent situations, to personal relationships, and to society as a whole in order to realize a better world and become an example to others. Situations of physical conflict should be anticipated and avoided through the self-confidence and wisdom that come from the practice of Aikido.

Of course the best way to understand what Aikido is, is to practice and experience it for yourself! To view Aikido in action, please see the “Resources” page.

Shortly after the onset of World War II, Morihei Ueshiba (O’Sensei) retired to Iwama, a small town in Ibaraki Prefecture (Japan). It has been documented that it was during this period (1942-1969), in the tranquil surroundings of Iwama, that the founder created Aikido (see this article). “Iwama style” is the style of aikido that was taught at the Iwama dojo by the founder of aikido, and especially the lineage passed on through Morihiro Saito, a close disciple who was given responsibility over Iwama dojo by Ueshiba. Morihiro Saito Sensei had the great opportunity to spend more time with the Founder than any other person, either before or after the War, and devoted his life to preserving the original Aikido of the Founder. Saito Sensei’s training approach was unique from that of other leading instructors in that it emphasizes the same importance of taijutsu (empty-handed techniques) and buki waza (weapons techniques), which includes the study of ken (sword) and jo (staff). O-Sensei looked upon this unavoidable connection between taijutsu, ken and jo practice as a determining factor for studying Aikido and Saito Sensei’s training method is based on the punctual application of these principles.

“In people’s lives, there usually comes a time when they reflect on their own roots and heritage. I think that it is important for each of us to include a study of the Founder’s technique as we travel on our own Aikido journey. Our closest link to the source is the Founder, Morihei Ueshiba, and the closest link to him is the Iwama Dojo. It is important to the Aikido community that more people realize that the roots of our practice lie with the Founder. It is important to pass on the great undertakings and achievements of the Founder correctly – even if that is done one person at a time.” (Morihiro Saito)

Aikido in the World

It is difficult to know how many Aikido practitioners there are in the world, one estimate in 2006 states that it was approaching the 1.5 million mark. Part of the difficulty in arriving at a number is that there are numerous Aikido organisations in the world, and many of these organisations operate completely independently from each other.

The primary Aikido organisation in the world is the Aikikai Foundation, led by the Ueshiba family. Other major organisations include Yoshinkan Aikido, Yoseikan Aikido, Shodokan (Tomiki) Aikido, and Shin Shin Toitsu (ki) Aikido.

Also within the Iwama Style or Iwama-Ryu Aikido there are different organisations, some of which operate under the umbrella of the Aikikai Foundation, and others which operate independently. One salient feature to note however, is that on the whole all Iwama practitioners aim to follow in the technical pedagogy expounded by Morihiro Saito Sensei, where Saito Sensei’s express mission was to preserve and transmit accurately the Aikido of the Founder, Morihei Ueshiba.

Below you will find a short introduction to some of the main Iwama Aikido teachers who are active in the world today, categorised by Japan, Europe, and the USA. TAFR actively encourages all its students to progress their Aikido careers by learning from the world’s leading Iwama Aikido teachers.

Hitohiro Saito Soke (b.1957) is the founding headmaster of Iwama Shin-Shin Aiki Shuren-kai. Hitohiro is the son of Morihiro Saito. At age of seven, he started to learn aikido from Morihei Ueshiba, the founder of aikido. Hitohiro Saito became an official instructor of the Iwama dojo in 1986 and remained so until 2004 when he separated from the Aikikai organization and formed his own group, Iwama Shin-Shin Aiki Shuren-kai. www.iwamashinshinaikido.com

Shigemi Inagaki Shihan (8th Dan Aikikai) was born and raised in Iwama. He became a student of the Aikido Founder in 1958. After the passing of O’Sensei in 1969, Inagaki Sensei spent 2½ years in the Iwama Dojo as uchideshi (live in student) under Morihiro Saito Shihan. Today he is one of the most well known teachers from the Ibaraki Shibu (Iwama) Dojo. He travels worldwide to teach, sharing his immense knowledge and experience of Aikido.

Hiroki Nemoto Sensei (b.1950) started training aikido in 1964, studying for one year with Morihei Ueshiba. Nemoto Sensei then continued to study from 1974 to 2002 under Morihiro Saito Sensei in the Founders dojo in Iwama. He also travelled with Saito Sensei all over the world and has extensive experience in training and teaching aikido. He holds a 7th Dan Aikikai rank which he received in 2017. He runs an uchi-deshi programme in Iwama, out of his own dojo, the Nisshinkan Dojo. wwww.nemotosensei.com

Ulf Evenas Shihan (b.1946) started aikido in 1968, and in 1973 he went to the Iwama dojo to study under Morihiro Saito Sensei. He studied under Saito Sensei for 29 years and was awarded 7th Dan in 2001. Currently Ulf Evenas Shihan directs Gothenburg Aikido club, which is the oldest Iwama Takemusu Aikido club in Europe, and constantly teaches seminars in Europe, Russia, Malaysia and Australia. www.goteborgsaikidoklubb.se

Daniel Toutain Sensei began studying Aikido in 1968. He trained under Noro and Tamura Sensei’s before meeting Morihiro Saito in 1992 in Iwama. In 2002 he received 6th Dan from Saito Sensei, and in 2013 received 6th Dan from the Aikikai. Toutain Sensei is the technical director of the Wanomichi International Association (WIA) which is an informal grouping of Certified Instructors from several countries who share the common goal of promoting the teachings of Morihiro Saito Sensei. http://www.wanomichi.net/

Justin Christou Sensei (5th Dan) is one of only a handful of people to have served over 8 years as uchi-deshi (live in student) in Iwama. He entered the Iwama dojo in 1995 and devoted himself solely to the study of Aikido and serving his late master Morihiro Saito Sensei. At the time of Saito Sensei’s passing he was the longest serving uchi-deshi. Christou Sensei returned to the UK in 2003, and teaches at the Budokwai in London, the oldest full-time dojo in Europe. www.aikidodojolondon.co.uk

Bill Witt Shihan (8th Dan) has been teaching and training since 1967, and is one of the most senior instructors in the United States. He has trained extensively in Iwama, Japan and is a direct student of the late Saito Morihiro Shihan. In addition, Witt Sensei has trained directly with Ueshiba O-Sensei, the Founder of Aikido. Witt Sensei is one of the few Aikido teachers worldwide who has been awarded the title of Shihan, or Master Instructor. www.takemusu.org

Patricia Hendricks Shihan (7th Dan) is one of the most known Aikido instructors in the world. She runs a full time dojo in San Leandro, California, as well as teaching internationally. Hendricks Shihan spent more than 7 years being uchideshi and living in dojos, primarily in Iwama, Japan under Morihiro Saito Sensei. She was one of Saito Sensei’s closest students and appears frequently in print and film serving as Sensei’s training partner as well as interpreter. www.aikido-sanleandro.com

Mark Larson Sensei (6th Dan) spend numerous periods as uchideshi between 1993-2002 in the Iwama Dojo under Morihiro Saito Shihan. He served as Saito Shihan’s main otomo (personal attendant), primary uke and translator, accompanying Saito Shihan on numerous occasions all over Japan, the USA, and Denmark. He is the founder and chief instructor of Minnesota Aiki Shuren Dojo, Nowthen, MN, and technical advisor for a number of Aikido Dojos in the USA and Japan as well as Canada, Denmark, and Sweden. http://www.aikido-shuren-dojo.com/