The founder of Aikido, Morihei Ueshiba, met the famous martial arts genius Sokaku Takeda in 1915. Takeda Sensei taught Daito-ryu Aikijujutsu in the first part of twentieth century, and it was this Daito-ryu Aikijujutsu that was the major technical influence on modern aikido. (See this link for more information.) In fact, Morihei Ueshiba received a Daito-ryu teaching certification, awarded by Sokaku Takeda in Ayabe in 1922.

In the video clip posted below, Katsuyuki Kondo Sensei, probably the worlds leading Daito-ryu Aikijujutsu teacher, explains the basic principles of Daito-ryu. These concepts however are very relevant to Aikido (or to any martial art for that matter), and most Aikidoka will recognise these principles. Kondo Sensei points out that by learning, practicing and applying these basic principles you will be able to perfect your technique.

Rei: Respectful and correct behaviour. Dojo etiquette (Reishiki) is an important part of Budo training, it creates a safe and enjoyable atmosphere in which to practice. Here are the Founder of Aikido rules for practicing Aikido:

“In Aikido, one blow can determine life or death.  When practicing, obey your instructor, and do not engage in useless contests of strength.”

“Aikido is an art in which a person learns to deal with not only one but multiple attackers.  It therefore requires that you practice at all times with careful awareness not only in front of you but in all directions.”

“Practice at all times with the feeling of pleasurable exhilaration.”

“The teachings of your instructor constitute only a small fraction of what you will learn.  Your mastery of each movement will depend almost entirely on individual, earnest practice.”

“Daily practice begins with light movements of the body, gradually increasing in intensity and strength.  There must be no excessive strain.  That is why even an elderly person can continue to practice pleasurably without bodily harm, and will attain the goal of his or her training.”

“The purpose of Aikido is to train both body and mind and to develop a person’s sincerity.  All Aikido techniques are secret in nature and are not to be idly revealed to others in public, not shown to rowdy or unprincipled people who will misuse them.”

Metsuke: This means “where to fix one’s eyes”. Here is some guidance from Kondo Sensei in considering the meaning and practice of the power of the eyes, or Metsuke:

Through the correct fixation of the eyes it is possible to read, predict, and discern another’s movements;

It is possible to control ones partner with a piercing gaze, the best situation being able to avoid a fight altogether;

Metsuke also means to have insight and the capacity to read another’s mind.

Here is a quote from Aikido Founder, O’Sensei, with some practical advice:

“Don’t look at the opponent’s eyes, or your mind will be drawn into his eyes. Don’t look at his sword, or you will be slain with his sword. Don’t look at him, or your spirit will be distracted. True budo is the cultivation of attraction with which to draw the whole opponent to you. All I have to do is keep standing this way.”

Maai: This is combative distance. Depending on the situation one’s maai will be different, for example if your opponent has a sword the maai will be greater than that of an empty handed situation. Even during a technique maai plays an important role. Please consider Kondo Sensei’s words carefully.

Kokyu: This can be translated as “breathing”. Kondo Sensei interestingly points out that if we practice kokyu sufficiently, then we will be able to perceive and read an opponent’s movements. Saito Sensei would say that kokyu power is present at all points in a technique, and that if it were absent then Aikido would become a dance. Following the training method of O’Sensei, every class we practice Morote-dori Kokyu-ho and Suwari-waza Ryote-dori kokyu-ho, exercises to develop kokyu power.

Kuzushi: This means “balance breaking”. Of course in all our Aikido practice our aim is to break the physical balance of our partner so we can easily perform techniques. Included in balance breaking is atemi (strikes to vital points) as well as kiai (combative shout), which can perhaps be viewed more as psychological balance breaking. Kondo Sensei says that “aiki” energy also falls within the concept of Kuzushi, which is worth careful consideration and practice; for example, read again above from O’Sensei: “…True budo is the cultivation of attraction with which to draw the whole opponent to you.”

Zanshin: There are various translations, one being “lingering mind”. A practical example of zanshin is maintaining awareness of one’s partner after a technique has been completed, don’t just think its all over. This echo’s an old Japanese samurai saying relating to zanshin, and illustrating that the term generally refers to the end of a confrontation: “When the battle is over, tighten your chin strap.” Zanshin however is not only for after the fact, but is a state of continuous mindful awareness. This has important implications for self-defence, being able to anticipate a potentially dangerous situation and thus being able to avoid it before it has begun. Kondo Sensei in the video explains zanshin as giving all of oneself to a situation, until there is nothing left to give. Consider maintaining this attitude moment to moment. It is possible to practice this way inside the dojo! (If you would like to read more, there is a lovely article about zanshin here.)

Kiai: The founder of Aikido really had great kiai (combative shout), apparently it could be heard over a mile away! As mentioned above, kiai can be seen as part of kuzushi, to break the psychological balance of an opponent. Also, kiai can be a part of kokyu, or breathing, creating correct coordination between body movement and breath. In Iwama-ryu Aikido, kiai is very important. Technique without kiai is like a silent movie! It is well worth an in-depth study of Saito Sensei’s kiai in the video footage we have. Sometimes Saito Sensei’s kiai is long, “haiiiiiiiiiii”, other kiai is not just one, but multiple strung together (see/listen here). Kiai produces a vibration in the air, it sets the tone in which a technique is performed, and it lingers too! 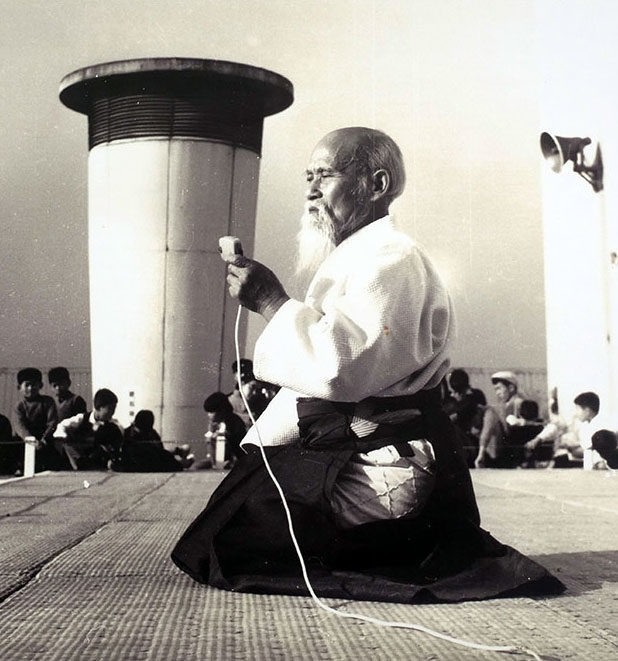 “The Way of a Warrior, the Art of Politics, is to stop trouble before it starts.” – Morihei Ueshiba 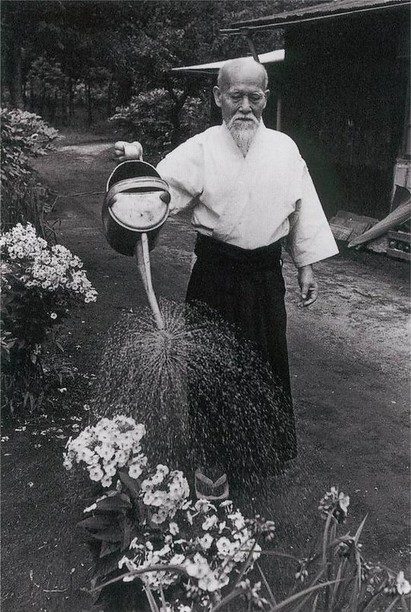 The Founder of Aikido was really enthusiastic about farming, even making extra heavy tools for himself!